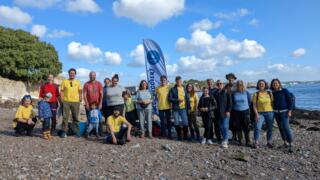 Written by The Rockpool Project

On Saturday 8 October our Plymouth Blue Recovery Rangers, Rock Pooling Families and a healthy dose of Rock Pool Project volunteers & team members, grabbed their passports and set off aboard the wonderful Edgcumbe Belle. The course was set for Cremyll, Cornwall on reportedly the oldest passenger ferry route in the UK. Luckily, the waters were calm as we approached Kernow, with not a pirate in sight!

We arrived safely at the picturesque Mount Edgcumbe House and Country Park – an historic park spanning 885 acres on the majestic Rame Penninsula. Taking in the wonderful views and the clear morning air, we headed up the hill, through the avenue of horse chestnut and beech trees, towards our first stop for the day and coffee!

Meeting at the Farriers cafe, we were told it was ESSENTIAL that we sampled the delicious drinks and cakes on offer. They certainly get the Rockpool Project seal of approval and a huge thumbs up. We chatted all things Blue Recovery Project and took part in the all important ID quiz.

Before we got down to the serious business of rock pooling, we squeezed in a quick, pose-as-your-favourite-rockpool-creature photo.

Barn Pool is not known locally for its rockpooling and it was unchartered territory for the Rock Pool Project. Everyone was excited to get exploring in the glorious sunshine to see what we would find. The Rock pool Families headed off with their bingo sheets and underwater cameras, while the Citizen Scientists delved into scientific surveys.

We were not disappointed. From mason worms to porcelain crabs, blue rayed limpets to bearded rocklings, lots of creatures were waiting to be discovered under the rocks and seaweed. With all the ID photos the rock pool dwellers of Barn pool must have felt like they were on the red carpet! We were having so much fun that we had to postpone the departure and catch a later ferry.

After discovering and documenting a really substantial and pleasing number of species on our waterproof devices – all records of which have now been shred with the National Biodiversity Network – we were delighted to chat to Nick from The National Marine Park about the citizen science and community work are so passionate about.

Thanks to everyone who took part in the day and of course The National Lottery Heritage Fund for making all this possible. Special thanks also to The Farriers, and Mount Edgcumbe for being such welcoming and generous hosts – helping us put on such an event, and to Plymouth Boat Trips for our safe passage across ‘international’ waters!