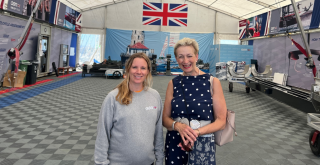 We were delighted to host Chair of the British Tourism Authority (Visit Britain), Dame Judith MacGregor over the weekend as a guest of Destination Plymouth. This was Dame Judith’s first visit to the city so it was a great opportunity to showcase the city and emerging National Marine Park at its best during Sail GP. Our thanks go to Steve Bellman, Oceanview at The Dome, Victoria Pomery and the team at the Box and Lindsay Hall, and the team at Real Ideas Organisation for their help in supporting the visit.

On Friday afternoon Dame Judith took part in a behind-the-scenes tour of the Sail GP Technical Village. There she met the Team GB Sailing team including Hannah Mills OBE one of the country’s finest female sailors.

Senior city leaders including Leader of the City Council Cllr. Richard Bingley, Chief Executive Tracey Lee and visiting VIPs including Christophe Matthieu, Chief Executive of Brittany Ferries, Andrew Harston, Regional Director of AB Ports and David Lockwood of Babcock also met Dame Judith who was impressed with the wider Sail GP conservation programme as well as the technical complexity of the sport itself.

The conversations were lively and constructive and included discussions about opportunities for the city, national positioning and Destination Management Organisation review as well as challenges facing the sector including the current economic impacts. Dame Judith agreed that the situation is challenging she would support the specific feedback of key issues to the Visit Britain team to share with government.

On Saturday morning Dame Judith visited ‘The Box’ and was shown around the extensive galleries and collections by Anthony Payne, Director for Place for Plymouth City Council and Ian Cooper Head of Operations. The visit was very well received with positive feedback throughout and disappointment that there was not enough time to see everything. A good excuse to re-visit in the future!

Lastly Dame Judith visited the Market Hall and ‘Immersive Dome’ run by Real Ideas Organisation and hosted by Chief Executive Lindsay Hall which was also very positively received and a further reflection of the diversity of cultural attractions the city has for visitors and residents.

“I was delighted to visit Plymouth during this landmark weekend as it hosts the Great Britain Sail Grand Prix, a showcase moment to demonstrate the city’s ability to host sporting events of the highest calibre and to put its outstanding tourism offer, hospitality and warm welcome in the global spotlight. It’s wonderful to see Plymouth thriving as a vibrant city. It’s a must-visit destination, capitalising on its growing sustainability credentials as well as supporting the UK’s first National Marine Park.

“Millions of jobs and thousands of local economies depend on tourism right across the country and it is also great to see the activity that Destination Plymouth is delivering with businesses and key stakeholders to attract domestic and overseas visits, driving the visitor economy.”