Pontoons back for Plymouth swimmers 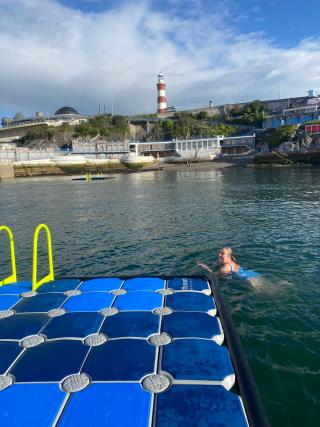 The pontoons are both located inside the Tinside Beach swimming area, with one closer to shore for younger or less experienced swimmers and the other further out.

A survey of swimmers last year found that 99 per cent welcomed the trial raft, and the feedback they gave the Council has been taken on board. The new pontoons are around 60 per cent bigger than last years and have a new non-slip surface. They are also more colourful, with the addition of Britain’s Ocean City branding and neon ladders which make them much easier to spot.

Council Leader Richard Bingley said: “Wild swimming has grown rapidly in popularity and the eight-week trial period we ran with just one pontoon last year was a huge success, so it’s fantastic to be installing two bigger and better pontoons for swimmers to use this year.

“A key pillar of my administration is better health care and one of the main aims of the National Marine Park is to increase engagement with the ocean, and make it easier and safer for everyone to access the water, so that our residents and visitors can enjoy the significant health and wellbeing benefits that the sea provides. The new pontoons are a really fantastic addition that are set to improve swimmers’ experience of the Sound.”

The pontoons have been made possible thanks to a grant worth £625,000 from the Getting Building Fund for a range of National Marine Park related projects. The Heart of the South West Local Enterprise Partnership was allocated money from the Government’s Getting Building Fund to invest in major infrastructure projects including supporting economic growth across the city.

By increasing engagement with the marine environment, the National Marine Park aims to boost Plymouth’s blue economy with increased tourism and the creation of new high-value jobs.

The pontoons were installed by Cattewater Harbour Commissioners and will remain in situ over the summer, before being removed ahead of winter storms to be safely stored for next year.