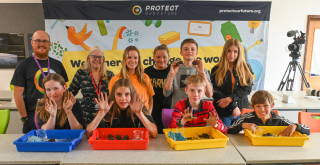 To mark one month to go until the Great Britain Sail Grand Prix returns to Plymouth, students from Years 7 and 8 at Plympton Academy were today joined by the world’s most successful female Olympic sailor (2 gold, 1 silver) and member of the Great Britain SailGP Team, Hannah Mills OBE, for a lesson on climate change and the importance of protecting the oceans.

The lesson, which examined the important role plants like seagrass play in tackling climate change by capturing carbon dioxide and releasing oxygen, was based on content developed by SailGP and produced by Protect our Future, the official charity of Sir Ben Ainslie’s Great Britain SailGP Team.

Protect our Future is a national campaign developed by the 1851 Trust to empower and equip young people and educators with the skills and knowledge to understand climate science and take positive action.  Its ambition is to help over 1 million young people to take action to protect nature, people and the planet.

The lesson featured a video of Sir Ben Ainslie explaining the importance of seagrass and a film of Hannah Mills visiting a seagrass bed planted by SailGP in Bermuda.  The children also took part in a practical session where they got to make their own seedbomb.

Current World Sailor of the Year, Hannah Mills, who is a member of the Great Britain team and Sail GP’s Global Purpose Ambassador, explained: “Having a positive impact on the people and places where we compete is central to everything we do at SailGP.  The ocean is our racetrack, so being able to take part in the lesson today and help to educate young people on the importance of protecting the seas and ways in which they can take positive steps to address the harmful impacts of climate change is a key part of our mission.

“It is one of the many ways we want to use the fact we are competing in Plymouth to spread the word and have a positive impact on the city and the local community.”

Research among 11-16-year-olds has shown that 51% of children are worried about what the planet will be like in the future, but almost a third are unclear on what measures they can take to be more environmentally friendly, which acts as a barrier to them taking action.

Protect our Future is designed to address this by creating a platform of educational resources to equip young people with skills and knowledge to understand climate science and their role in tackling climate change. The resources for young people and teachers are free to use, fully researched, backed-up by science and include practical actions to take.

Year 7 student Sophie Skinner said: “It was exciting to meet Hannah today and it’s great that she came into our school to share SailGP’s message. We learnt that seagrass is important because it traps carbon and stops it from going into the ocean.  Making the seedbomb was really fun, using all the flour and water to make a mixture, though it was a bit messy.”

Plympton Academy’s Head of Physics, Joseph Wellerd, who delivered the lesson with support from Hannah Mills added: “Teachers are expected to teach climate change, yet some do not possess the knowledge or lack confidence with the subject matter, so having access to these resources created by Protect our Future and backed by high profile advocates such as Hannah and Sir Ben is an enormous help.

“It enables teachers to educate young people on climate change and provide them with guidance on the things they can do to play their part and feel like they are having a positive impact on an issue which will be a major concern to them.”

Elaine Hayes, Interim Chief Executive of Plymouth Sound National Marine Park was also at the school to participate in the lesson.  She said: “It’s been a real pleasure to join Hannah for this fantastic climate change lesson today. Plymouth Sound National Marine Park is about making Plymouth truly sustainable through ensuring young people can develop the skills they need to fulfil the roles in our businesses offering training that leads to high value jobs.

“Our transition to net zero is just one example where STEM learning is vital to ensure we have the right skills to meet this. Opportunities like this for young people to be engaged in learning about climate change are incredibly important in not only protecting our ocean and environment but also in opening doors for inspiring young people to think about STEM careers. I’m delighted that as host city of the Great Britain Sail Grand Prix and home of the UK’s first National Marine Park, Plymouth has been able to work with SailGP to provide this fantastic opportunity for learning.

“Today is just one of the great projects being delivered this year as part of the Inspire programme in partnership with Plymouth City Council and SalGP to engage and inspire young people to not only consider future careers in STEM but also to understand, explore and engage with the waters of Plymouth Sound and the National Marine Park.”

The Great Britain Sail Grand Prix will return to Plymouth for the second year in a row on 30 and 31 July 2022 and will feature nine teams battling in short, intense races in identical hydro foiling F50 catamarans at speeds approaching 100 km/h.

The British boat will be driven by Sir Ben Ainslie, who will be competing in the UK for the first time since the Portsmouth America’s Cup World Series in 2016.  Tickets for the event are available at SailGP.com/GreatBritain. As part of this year’s event, SailGP will deliver a number of community impact activities through its Inspire program which are designed to connect with young people in the area and showcase the importance of sustainability in demonstrate how sailing can be a force for good. The Inspire program has engaged over 8,000 young people globally and is well on its way to reaching its target of 10,000 young people by 2025.