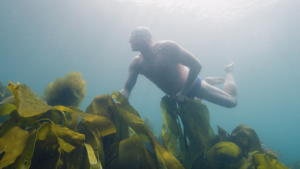 On Saturday 3 September, the Kelp Forests off Plymouth will be dedicated to Her Majesty as part of The Queen’s Green Canopy (QGC) in a special ceremony to highlight the importance of kelp as an environmental treasure which fringes much of the UK’s coastline.

Kelp forests are some of the most diverse and productive ecosystems on earth. In the UK, kelp forests cover an area similar in size to the nation’s woodlands – estimated to be 3.2 million hectares or 13.2% of the UK’s land surface. Just like forests on land, kelp plays a crucial role in the regulation of our atmosphere by absorbing carbon dioxide.

Led by Lewis Pugh, QGC Ambassador and UN Patron of the Oceans, a wild swimming relay will take place in the waters surrounding Plymouth Sound – the UK’s first National Marine Park – ahead of an unveiling ceremony overlooking the spectacular seafront.

Home to the Royal Navy, Sailors and Royal Marines from HMNB Devonport will start the relay by delivering a plaque to Lewis and a group of wild swimmers who will swim it to shore. The plaque will be passed to children who will swim the length of the Tinside Lido to deliver it to the Naval Base Commander, who will then present it to Her Majesty’s Lord Lieutenant, to finally be unveiled by the Mayor of Plymouth.

Members of the Plymouth community are invited to gather around the harbour to help celebrate this unique marine dedication as part of The Queen’s Green Canopy and to cheer on the wild swimming relay. Open water or wild swimming is a popular activity in Plymouth Sound, with over 30,000 members in the Devon and Cornwall Wild Swimming club.

“We are thrilled to dedicate The Kelp Forests off Plymouth to Her Majesty in honour of her Platinum Jubilee. Kelp is a hidden wonder – it’s magic is largely unseen. Kelp Forests are extremely important ecosystems which are vital to the health of our oceans. It is wonderful to see Plymouth’s environmental treasures recognised as part of The Queen’s Green Canopy.”

“The UK’s kelp forests cover an area of approximately two million hectares, supporting high levels of diversity with single kelp plants providing a home for over 50 species and 50,000 organisms. Providing habitat and food for a wide range of crabs, lobsters, fish and marine mammals, kelp also plays an important role in protecting our coasts from storms, cycling nutrients and acting as blue carbon donors. Indeed, it is estimated that kelp forests provide millions of pounds worth of goods and services to the UK economy. It is therefore vital we protect and conserve these amazing habitats.”

“It’s such an honour to have the marine component of The Queen’s Green Canopy in Plymouth Sound National Marine Park. Here in Britain’s Ocean City we are dedicated to celebrating our amazing waterscape and to help locals and visitors alike, get in, on or under the water. The dedication of our kelp forests in this Platinum Jubilee year will help raise the profile of this iconic species that surrounds our islands and its importance to a wider public who rarely get to see kelp forests.”

We can almost smell #Summer through this pic! The feel good vibes are sky high 🌊🌞🐶

Sharing some sunshine on this dreary day here in Plymouth...Happy #Friyay🧡🌊

Take time to sit peacefully, breathe in the fresh crisp air, and watch the world go by in Plymouth Sound National Marine Park 💙

Last week Ranger Nick went over to @mountedgcumbe for a volunteer day with the Mount Edgecumbe volunteers. They planted Lime trees, which are long-lasting and perfect for withstanding our coastal conditions.

If you want to volunteer with Nick as part of the #PSNMP volunteer programme, please email Nick at nick.helm@plymouth.gov.uk.

The sun is setting on January, what's in store for you this February?

There's 1 week left to submit your entries! We're looking forward to reading all the suggested ideas on ways to protect and enhance the marine environment in Plymouth Sound National Marine Park.

If you're still working on your idea, that's great. As long as you submit it by 5 February, it will be considered.

For further details on how to take part, head to our website 👉 http://ow.ly/Kn6L50MrKFj ...

The Tompot Blenny! Captured on the James Eagan Layne wreck that was beached and sunk during World War II in #PSNMP.

Do you have an idea for enhancing the marine environment for jellyfish or any marine animals in Plymouth Sound?

Make sure you submit your ideas for our Help the Sea campaign by Sunday 5 February to be in with the chance of making your idea a reality! More details can be found on our website ☞ plymouthsoundnationalmarinepark.com/helpthesea

What does marine nature in Plymouth Sound National Marine park mean to you?

Tell us your ideas to protect and enhance the enivronment via...

The most innovative ideas will be taken forward and we will work directly with you to move forward with your idea.
You have until Sunday 5 February to get your idea to us!

Please make sure you have a towel to warm up and dry yourself at the end of your dip, Nick learnt his lesson…

We're looking forward to a dip in Tinside Lido this Summer, bring on the warmer weather!☀️