Out of the Blue: Time and tide 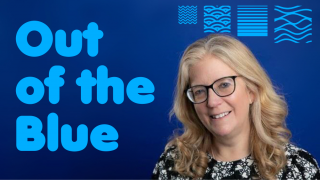 Growing up, the beach was an important part of my world; I didn’t understand tides, and once Mum had parked the car the most important task was to race up the ramp to see how much beach there was to play in for the day. A big low tide meant loads of beach, rock pools, space for sand castles, sinking mud and shallow seas for splashing around. If the tide was in there was very little to do and Dad would almost always take us away for a walk, at least until the tide receded. Either way, I was aware that the size of the beach changed throughout the day. Tides are, however, strange, confusing and ever-changing – a source of great delight when they are “right” and disappointment when they are not. In many places around the Plymouth coastline at certain states of the tide, there is no beach at all so having an understanding of tides is really helpful if you don’t want to disappoint your little ones.

So first I am going to try and explain why tides happen and then do a quick how-to interpret tide times, so hopefully, you will all be wiser afterwards and be able to choose the right time to go to the beach.

Tides are caused by two forces acting in different ways – one is the rotational force of the Earth, and the second is the gravitational pull of both the sun and the moon on the Earth. You won’t be surprised to learn that it was good old Isaac Newton who first explained how tides occurred. Now pay attention because we are about to hit a patch of science!

So the size of the gravitational pull of the sun and the moon is determined by their size and distance from the Earth, In a nutshell, the pull of the moon is greater than the sun as it is so much closer; the sun has a pull of about half that of the moon. So, now for the science! In order to understand the tide, you need to know about deformation – that’s to do with how an object changes shape. So the pull on the ocean causes this change in shape or bulge. The side of the Earth that is facing the moon will have the biggest bulge due to the biggest force on it. There will be a matching bulge on the opposite side of the earth caused by inertia. Low tides are caused when the gravitational pull is at its lowest point. The whole process happens twice in each 24-hour period, so your local beach will experience two high tides and two low tides each day – just not always at a convenient time for visiting! However, as the moon’s cycle changes by approximately 50 minutes each day so the point at which the tide is high or low will shift which is why the size of the beach differs even when you go at the same time each day.

The best way to know is to consult tide times – the old-fashioned way was in a paper book but fortunately today Google can help us. Firstly make sure you include your location as even beaches close to each other can have differing tides. The date is also important. The next thing to understand is that tides are referenced against something called chart datum which is a value calculated from an average of low tide heights. So when you see a number on a tide table, it is showing the difference between it and chart datum at a given hour of the day or night. A big number indicates a high tide which means less beach whilst a small number indicates a low tide which means lots of beach. High and low tide are generally six hours apart so it’s good to know what the state of the tide will be otherwise you are in for a long wait.

So whether you want to rock pool, beach comb, swim, surf, paddleboard or just laze around the tide timetable is the first step towards a great day out!